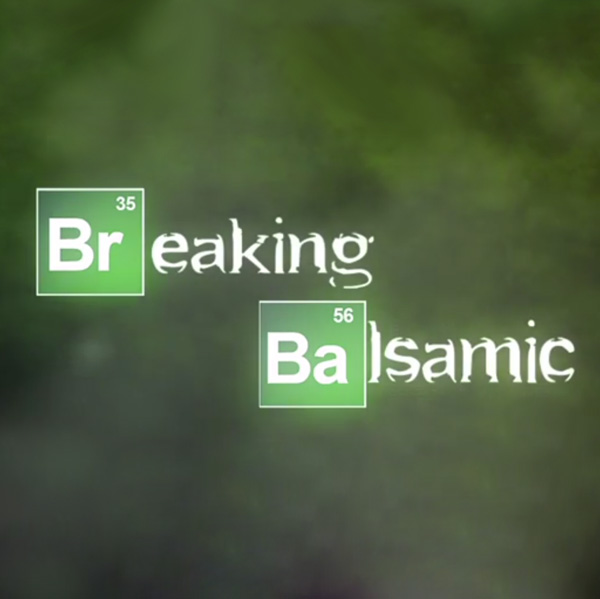 Breaking Balsamic is a parody of American television series Breaking Bad. Created by Turner Barr, the film was shot at Villa Bianca and talks about Traditional Balsamic Vinegar of Modena, the real one. Let’s take a step back. Fall 2013, the harvest is almost over, the visits at the Acetaia continue. Turner Barr, an American blogger who goes around the world in 80 jobs, comes to visit our acetaia. He works with us for a day: we harvest, we cook the must and we talk. He tells us his story and we narrate the story of our family, of our product: the passion for six generations. We show him the peculiarities of Traditional Balsamic Vinegar of Modena DOP, which has nothing to do with the other vinegars, and something clicks. 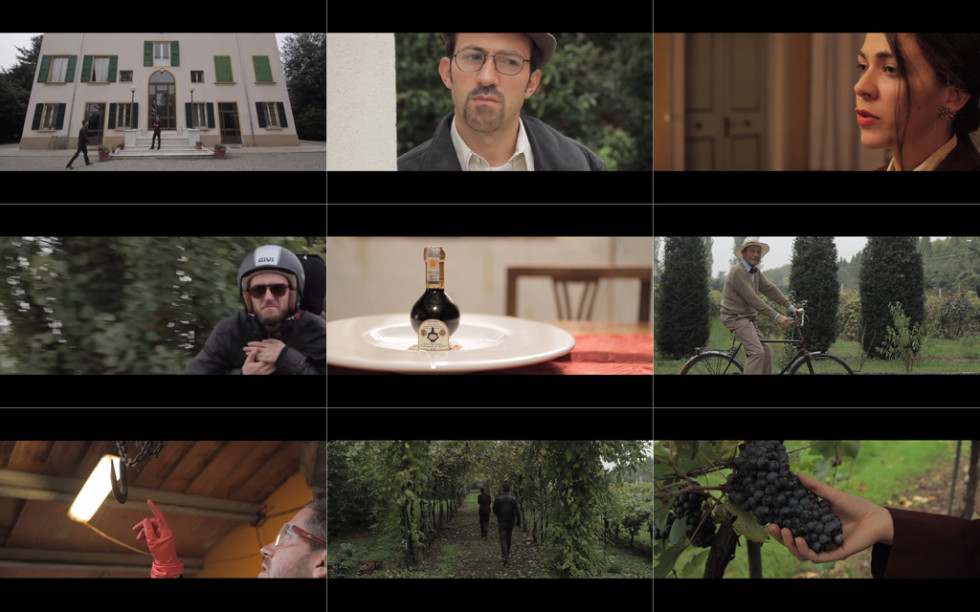 Behind the scenes of “Breaking Balsamic” 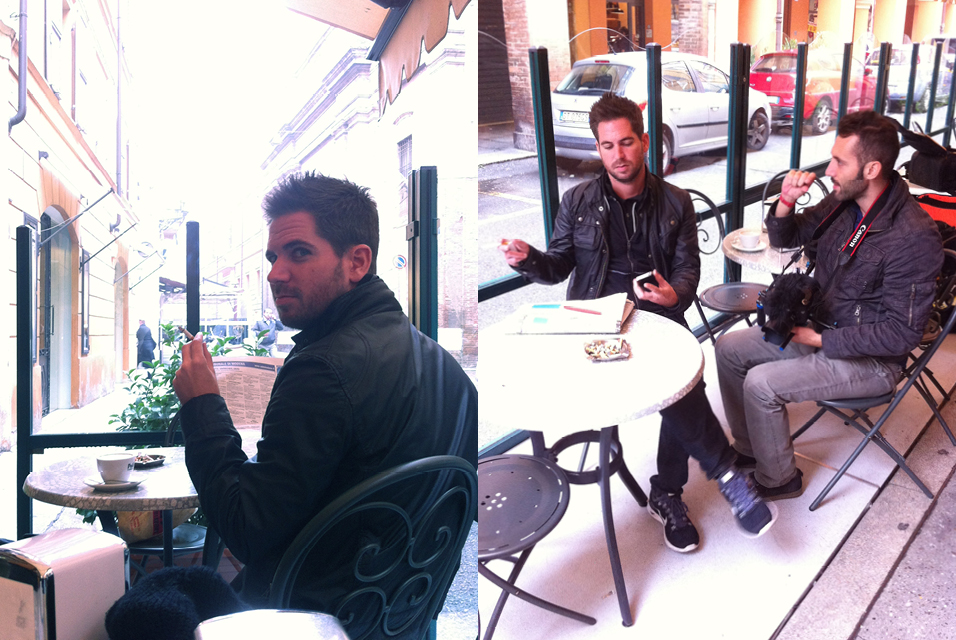 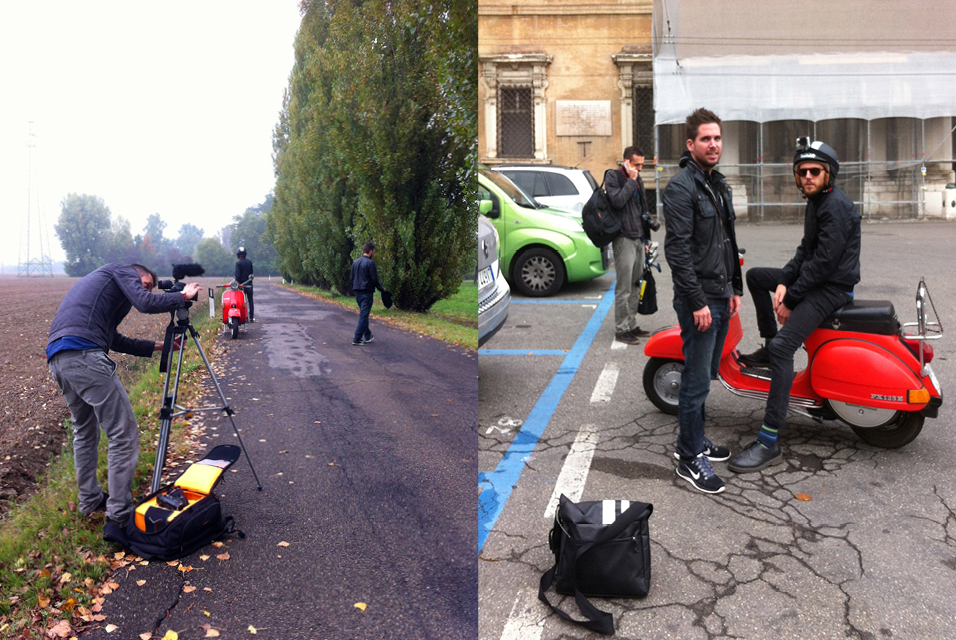 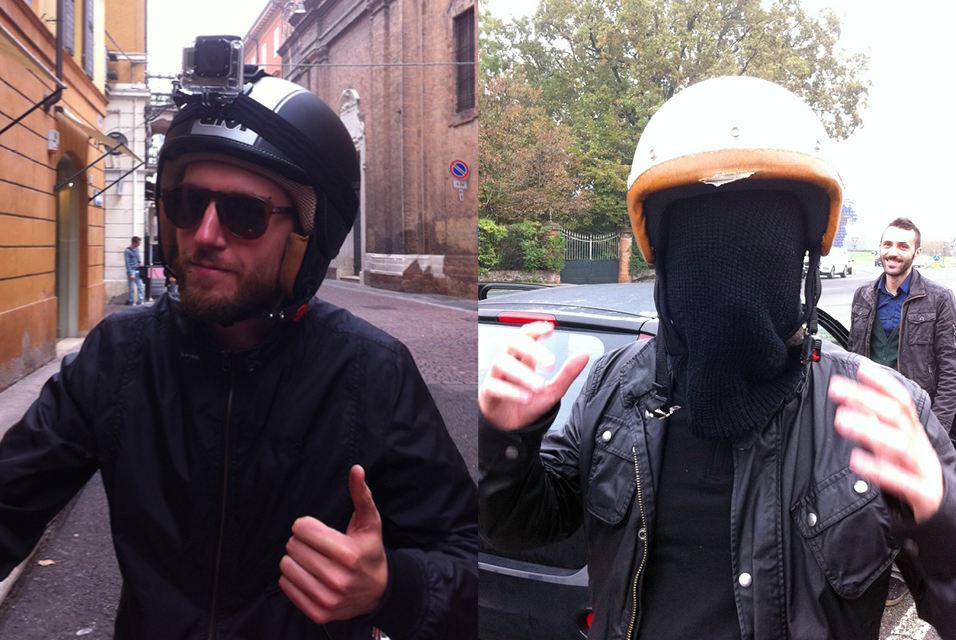 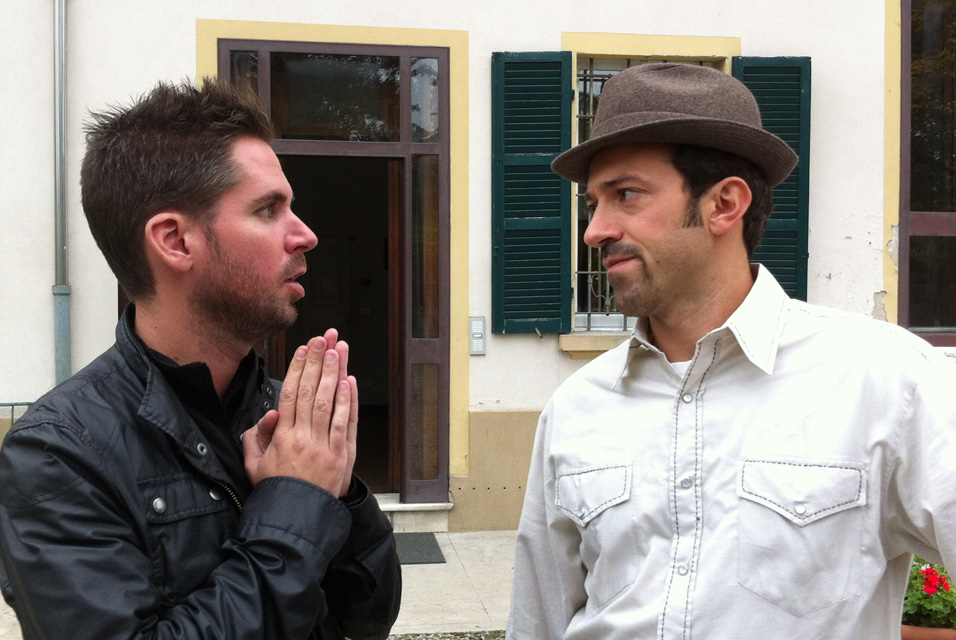 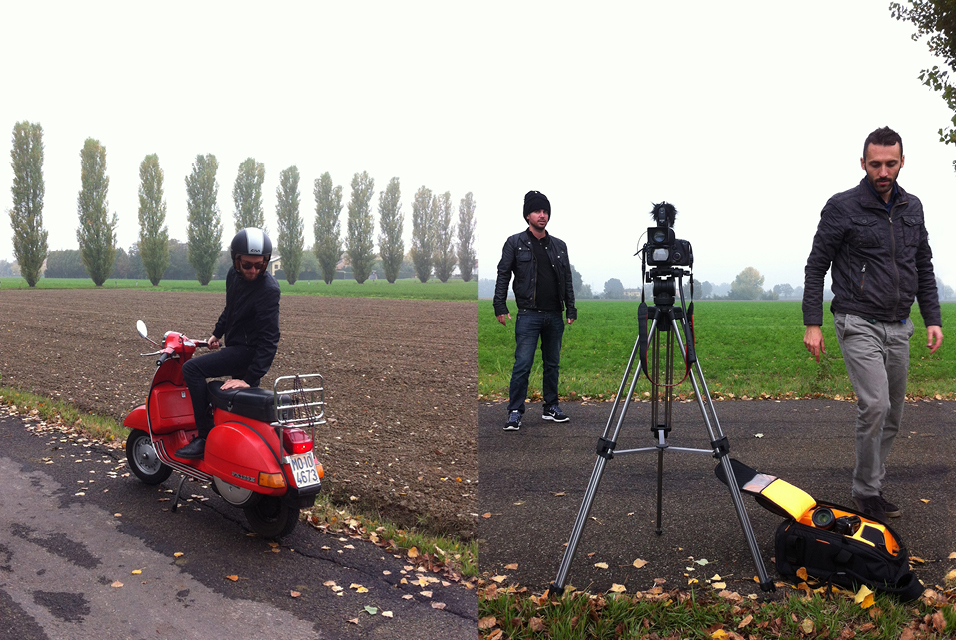 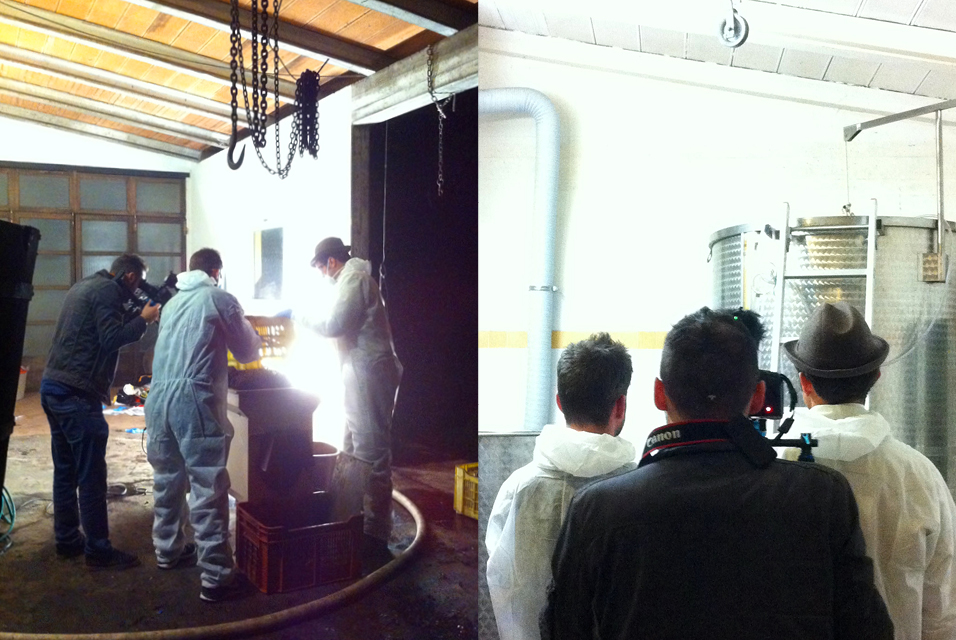 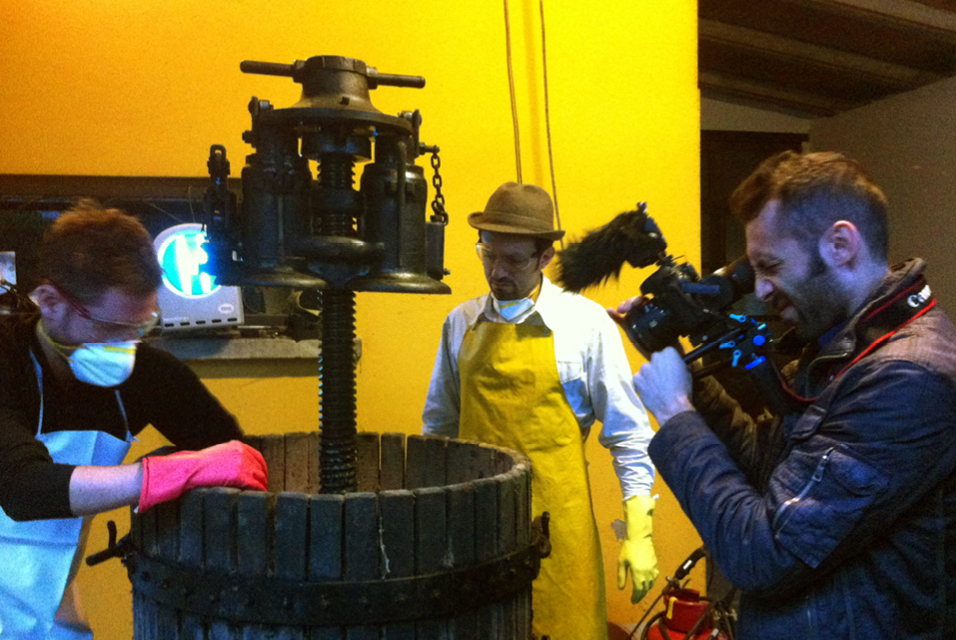 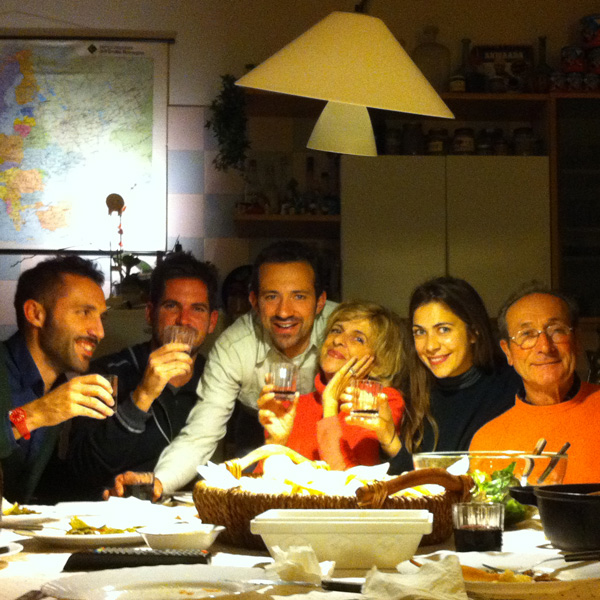 THANKS to: Nicholas Montemaggi (Blogville) for introducing as to Turner; to the genius and madness of Turner Barr who has involved us in this adventure, Emiliano Bechi Gabrielli who has done filming of incredible beauty in painful light conditions (rain, gray, dark), Moritz Vogel who edited the video, Alberto Lepri (El Grippo) a great actor for a day with a gorgeous Vespa and the two actresses who have lent their faces even though they do not appear in the video (Irene and Francesca). We invite you to visit Turner’s blog “Around the world in 80 jobs” and read his version of the facts. 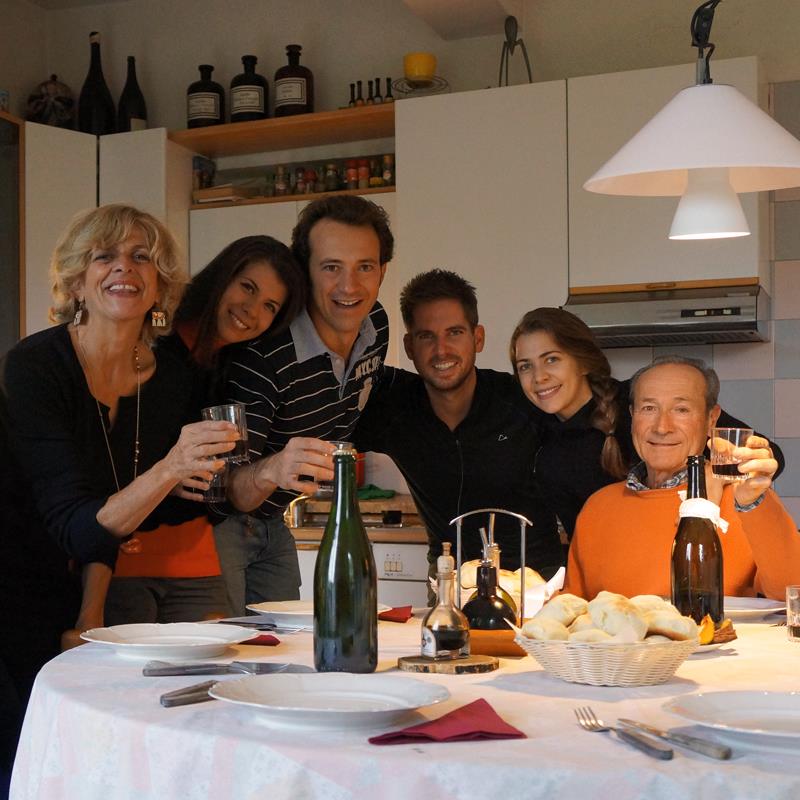 Making Traditional Balsamic Vinegar of Modena is “one of my favourite jobs of all time this past year” word of Turner. Who is he? A young American blogger who travels the world doing different jobs then told through video, photographs and words in his blog “Around the world in 80 job”. In his article “Traditional Balsamic Vinegar Making Modena in Italy: the Balsamic Cook” he describes the day spent at Acetaia Villa Bianca. After spending a day’s work with him, we woke up wondering: “to work while having fun or to have fun while working?”. We invite you to visit his blog and see the video … more news soon! 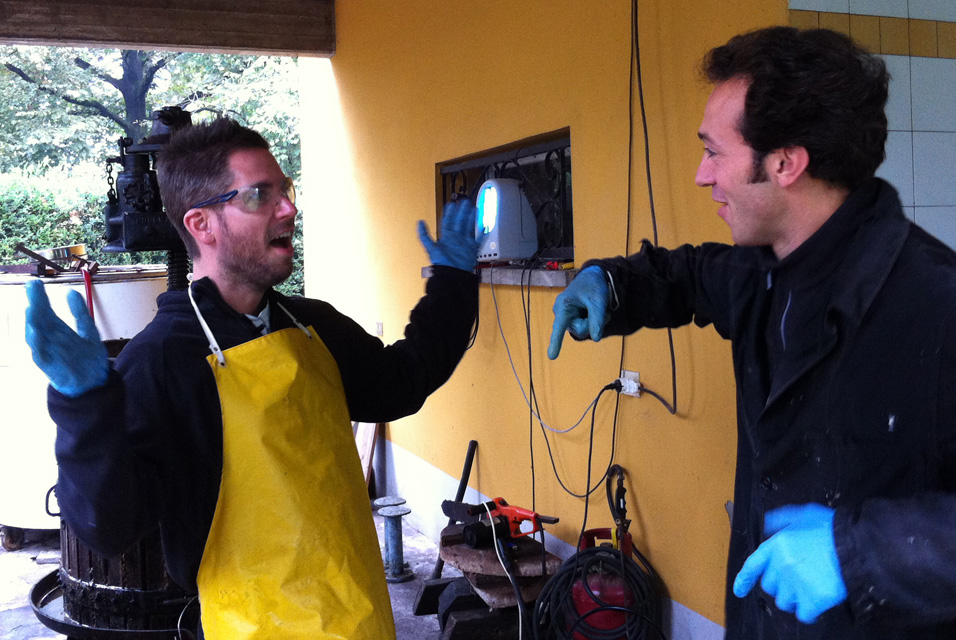 Sorry, this entry is only available in Italian.

Presentation of Traditional Balsamic Vinegar of Modena and our company at Expo Gate (Milano) with Claudio, Irene, Emilio and Aurora. The event is part of “FOODAMI Culinary culture for conscious consumers” a series of meetings with producers, farmers and experts in the agri-food sector with food and gastronomy as its focal points. We did a workshop with children and this is the result: 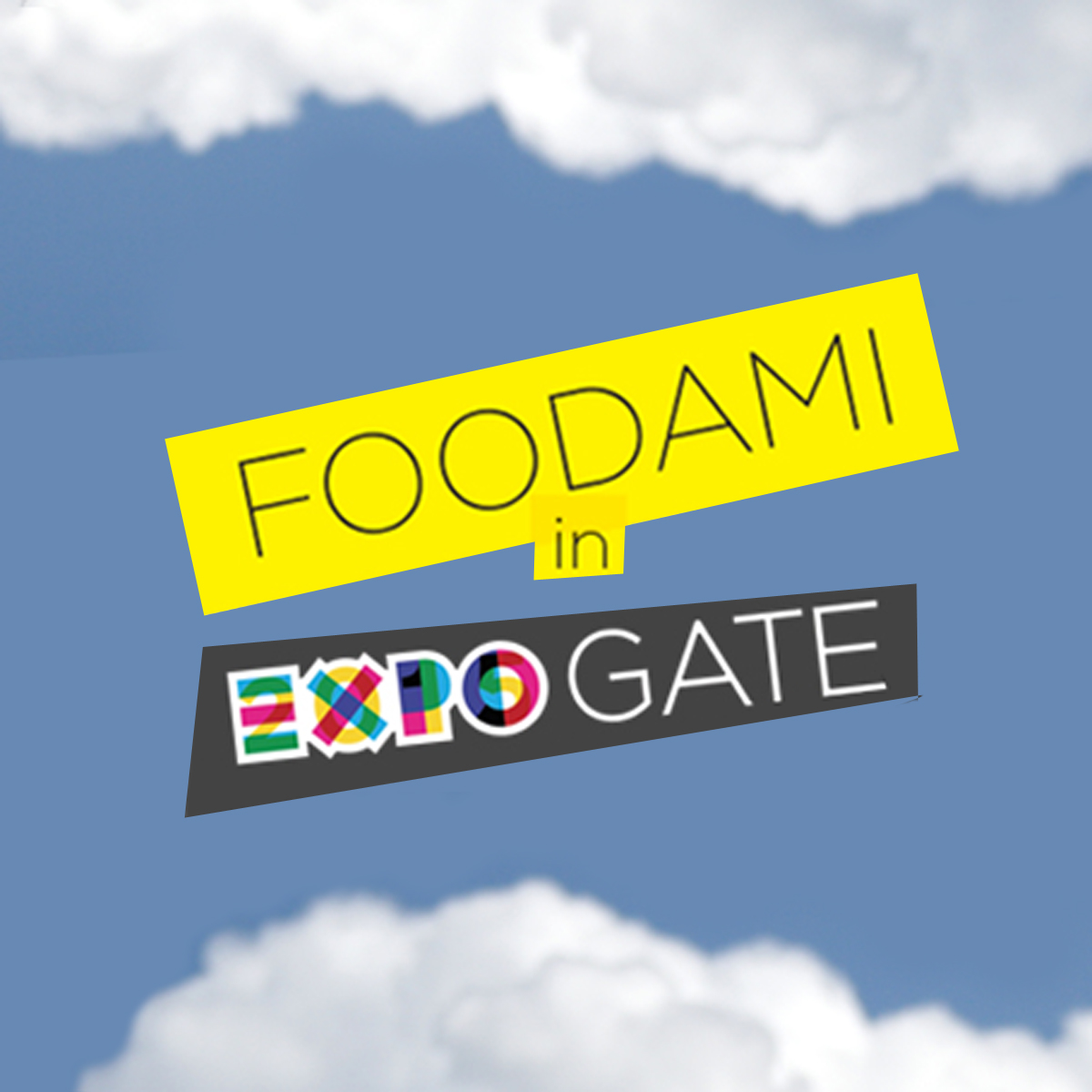 “a tsunami of food, food you love and food in Milan”

“FOODAMI Culinary culture for conscious consumers” a review, created specifically for Expo Gate by Andrea Vigna, cook and blogger, proposes a series of meetings with producers, farmers and experts in the agri-food sector with food and gastronomy as its focal points. Tuesday, June 17th at 6pm we tell the strange story of Traditional Balsamic Vinegar of Modena. See you in Milan, at the Expo Gate in front of Castello Sforzesco!

On this occasion you can try a perfect combination: ABTM and ice cream. Monaka, a scoop of italian homemade ice cream between two Japanese waffles with drops of Traditional Balsamic Vinegar of Modena of Antica Acetaia Villa Bianca. From 10am to 8pm, Expogate, “food truck” of Monaka in Piazza Castello.

Spring, Summer, Autumn and Winter: Visits are welcome throughout the year. In September and October you’ll enjoy the colours and scents, whereas in April, May and June the mild climate will foster walks into the park and outdoor games for children. We organize visits for the whole family: while adults visit the Acetaia Villa Bianca and taste the product, kids can take part in workshop in the acetaia and in the garden. For more information contact us! 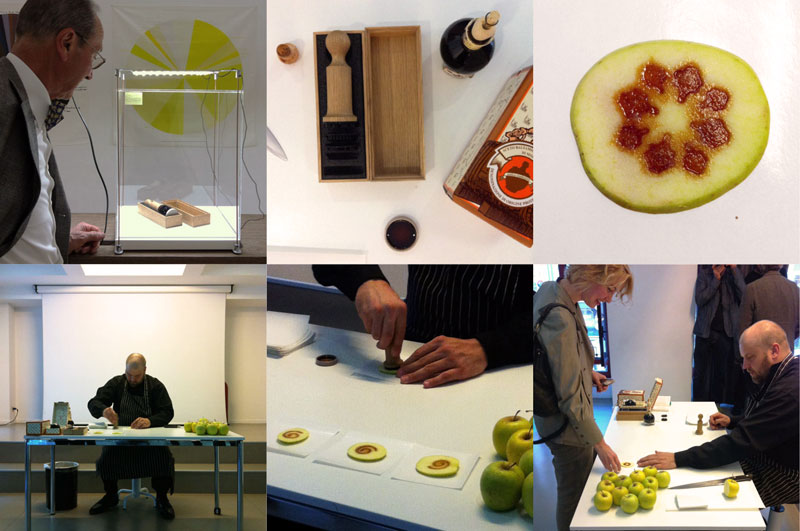 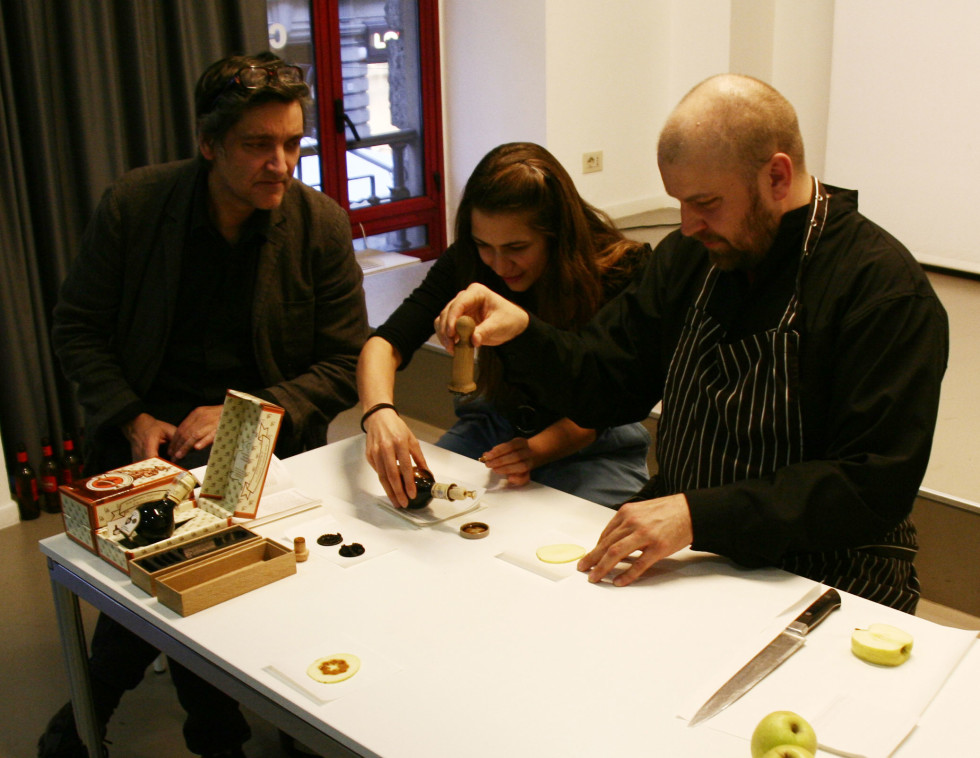 The students draw in the acetaia.

Steven Guarnaccia (illustrator, author and teacher) and five students from Parsons, The New School for Design of New York after the visited Villa Bianca and drew their feelings… in the Acetaia!. The result? Smells, sounds, tastes, sights and caresses translated into images which will cross the boundaries of the “land of the traditional balsamic vinegar”! We are proud to cherish the memories of the vinegar visual impressions of Stephanie, Anna, Sylvia, Danielle and Vincy. A special thanks to Steven Guarnaccia for his precious gift: his illustrations will soon be exhibited in our “acetaia” and they will accompany the Traditional Balsamic Vinegar of Modena in the future! 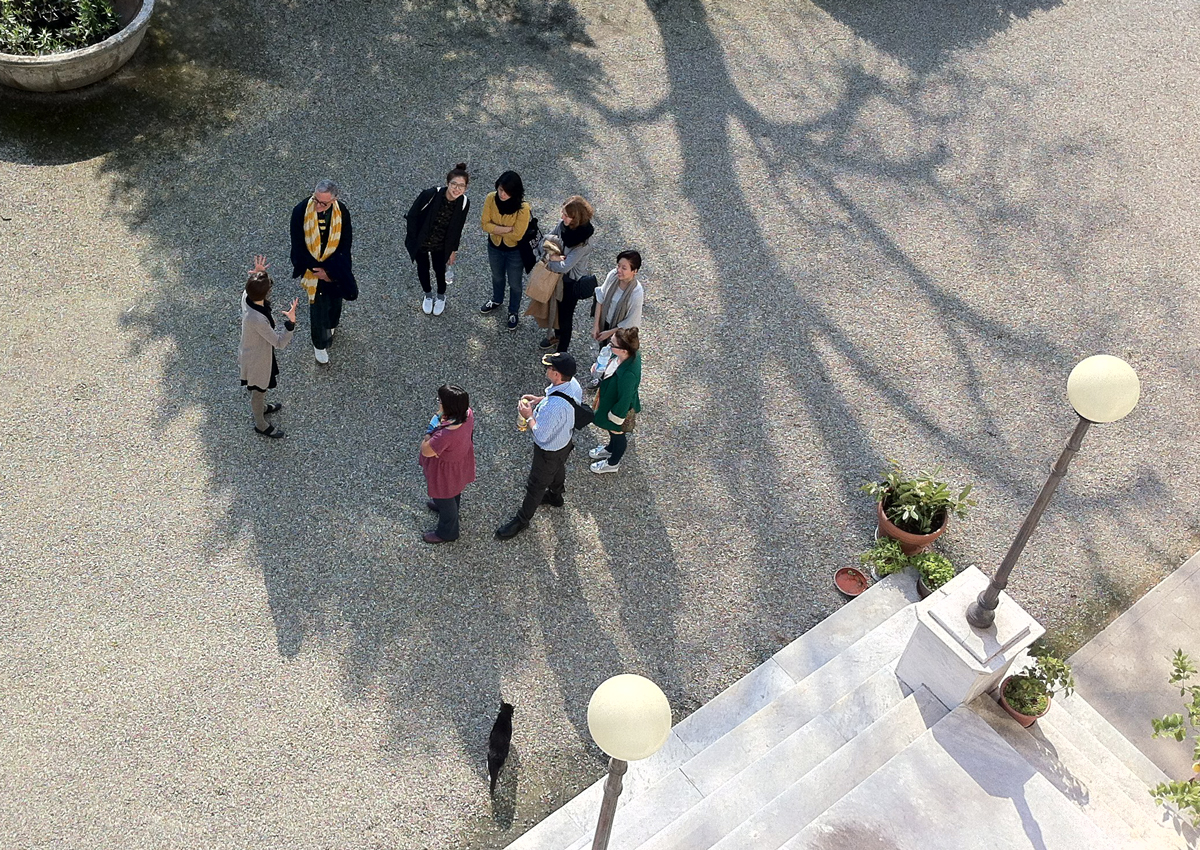 The arrival of the group 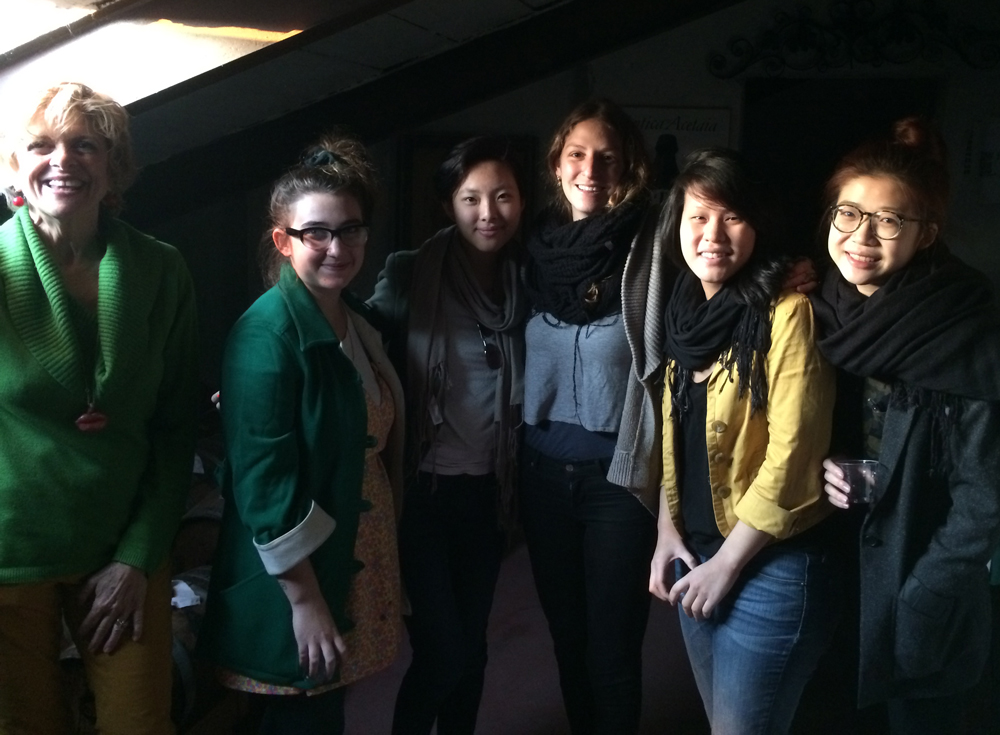 Irene and the students in the acetaia 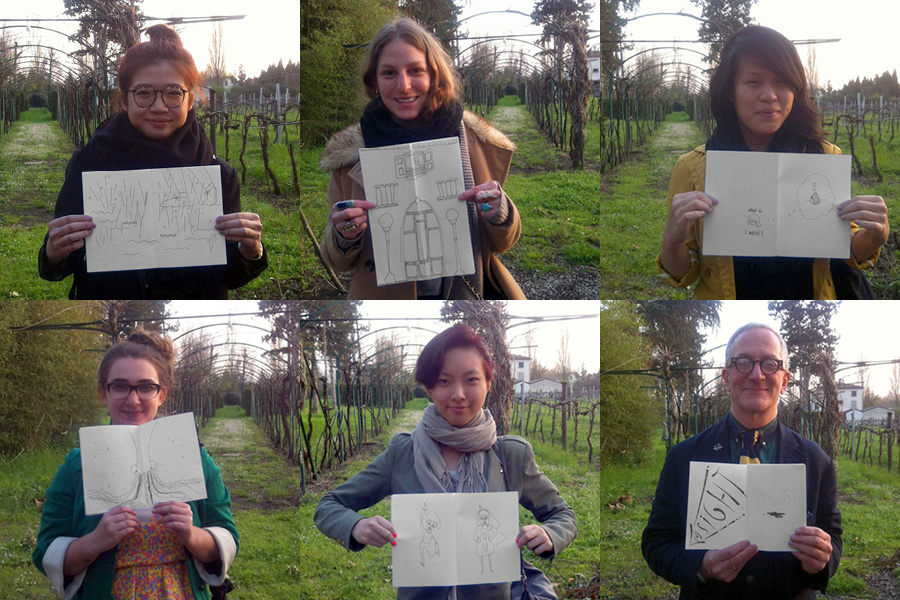 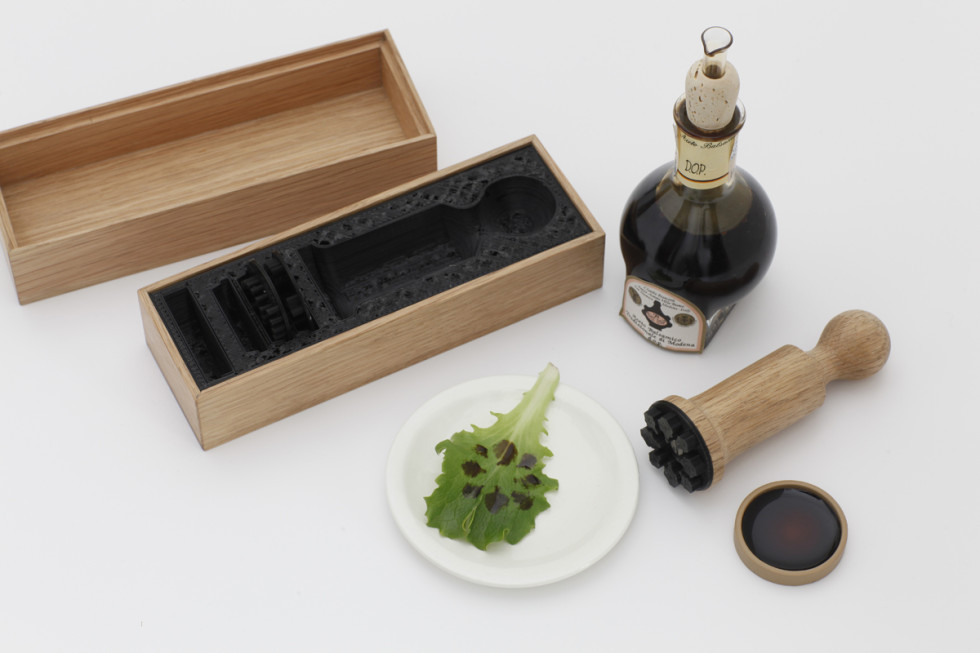 “G_S_T is a tool that allows you to introduce elaborated graphics into the dish composition using the Aceto Balsamico Tradizionale di Modena as a medium. Thus the ABTM no longer has the role of an ingredient, but the one of an icon with taste and personality.” Martí Guixé, 2014